Review: Courage Has No Color 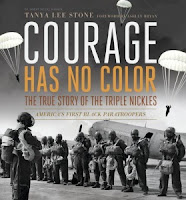 
"You will be caught up in the rhythmic pacing of events that underscore how the Triple Nickles served as a beautiful symbol of what we are as humans, not just as Americans. Despite the indecencies directed twoard them because of color, the black paratroopers held rather to the decencies of people who honored their gifts of service to the nation despite color."


Stone opens with a riveting description of what it may feel like to be in paratrooper training. She's got photos of the Triple Nickles training at Fort Benning, Georgia in 1943 and she walks us through the breathtaking jump step by step. Then in subsequent chapters of the book she lays out the state of the military and American society in the '40s. Advertisements and popular movies that portrayed African Americans as happy, humble servants, clowns and jesters, or angry rebels. The military was segregated by decree, although black leaders had been working towards more opportunities for black soldiers. Morris's men served as guards, drivers, cooks, or general maintenance workers. They wanted the chance to serve as soldiers and fight for their country as men.

They trained extensively but were never put into combat. Instead they were sent out West to be smokejumpers for the forest service. They worked from Pendleton, Oregon and Chico, California. Stone says, "The Triple Nickles [...] played an integral part in pioneering the field of smokejumping as they dropped into the blazes and put them out. They tested equipment and techniques that are now standard smokejumping practices." This is a part of our history that has not been much celebrated in the past. It's high time we had books like this in our schools, libraries and home. It's a dramatic and exciting telling of the story, backed up with priceless and engaging illustrations. This volume is highly recommended for ages 10 and up!

Fascinating story, Andi. And could this book have a better title? Thanks for sharing it.