Last week I posted a Haibun focused on my Clivia plants. Haibun is a Japanese haiku form made famous by Basho's 17c. book A Narrow Road to Deep North, a travel journal filled with haiku. Haibun combined prose writing with poetry; it is haiku wrapped in story. I'd like to continue the story of our Clivia plants in another haibun this week and share what happened at the Longwood Gardens Clivia show .

Clivia are from South Africa, where they grow wild on the forest floor in Kwazulu-Natal, Eastern Cape, Mpumalanga and Swaziland. They are traditionally harvested for medicinal purposes including pain relief and help in childbirth. Since the 19th century they also have been cultivated for their beauty. They are dormant in the winter, left out in the chilled autumn and dry most of the winter months. Then they should be gradually warmed up and watered to stimulate new growth. A flower stalk shoots up and bursts into brilliant bloom in early spring or late winter.

so many months
I've tended this old pot-
now a jewel!

The story that my aunt Joan told me about our Clivia is quite interesting. She said back in 1975 a friend in her church gave her an anniversary gift of a Clivia that had grown from one that been in her family for generations. The friend told her that an ancestor of hers had smuggled a root slip of Clivia into the country after visiting her old home country of Austria-Hungary in the 1890s. She hid it, sewn into the hem of her petticoat, to bring it to her new home. That little root slip had grown into a plant that produced flowers and new generations of plants being passed down through the family. I have read that they are long-lived plants but that is amazing!

Here is my plant, the fourth generation from my aunt's plant, which is descendent from the Austria-Hungary plant smuggled into the country around 1890: 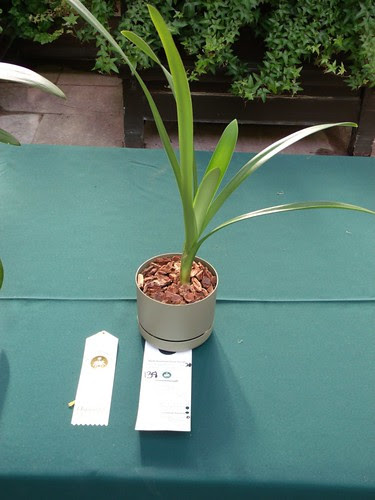 tiny slip of root
from my mother's garden -
smuggled home

My son and I re-potted a couple young shoots of our plant in order to enter the North American Clivia Society show at Longwood Gardens last weekend. Above is the plant I entered in the "Enthusiast" classification, to which they gave an Honorable Mention ribbon. I didn't expect to win anything since we were not in bloom and certainly not competitive, but it turned out that Puck was the youngest member exhibiting and they were thrilled to welcome him. They really were sweet about including and rewarding his interest and participation, creating a new "Junior Class" for his plant and giving him the "Best in Division" and "First Place" ribbons. He was so proud! 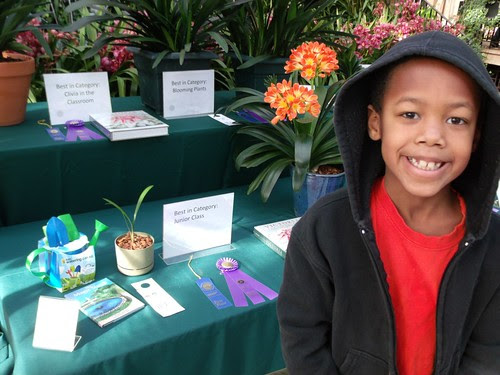 
We spent two lovely days exploring the Conservatory and taking pictures of everything from Orchids to Bromeliads.  It was exquisite.

My son took about 200 photos and came home talking about the seeds he wants to plant. 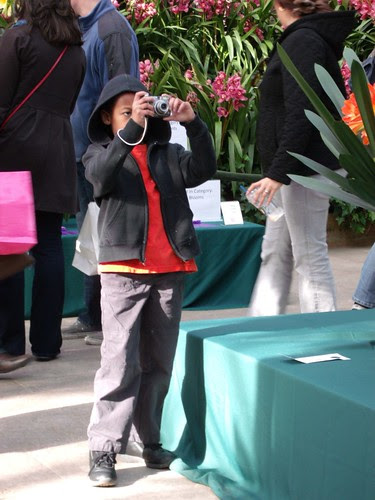 a small thing;
camera in the hand of a child,
the spark in his eye

I noticed this week that March 9, 2013 was my SEVEN YEAR blogoversary!!

The Friday Poetry Round up is hosted by Jone at Check it Out. Enjoy the poetry! If you are in the Northern Hemisphere celebrate the coming of spring!
Posted by Andromeda Jazmon at 5:30:00 AM

What a lovely post. Happy Blog Birthday!! So glad to have met you online. Have enjoyed seeing all your beautiful photos and reading your wonderful haiku these many years.

Those clivia blossoms are just gorgeous. And congrats to your son on his blue ribbon. He's already quite the gardener. Both of you must be very proud :).

Congratulations to you for reaching this milestone and to your son for the recognition of his green thumb! And thank you, for all the gorgeous posts! This one is quite a beauty.

Happy Blog-aversary! Your son's smile says it all! Beautiful photos and poetry. =)

Where have the years gone? You were one of the first blogs I followed when we started in 2006!

This post is fun in so many ways. Love it that you are raising a botanist and a photographer!!

Thank you my friends! I wouldn't be here without you!