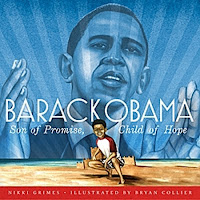 written by Nikki Grimes, illustrated by Bryan Collier. Simon & Schuster, 2008. We've been reading this book over and over in the past several weeks. The story begins with a mother and son watching Obama give a speech on TV during the 2008 campaign. The little boy in the story starts to ask why all the people are chanting and clapping as Obama stands before them giving an inspiring talk. His mother explains the importance of that historic moment by giving him the story of Obama's life. We hear about his beginnings, his parent's origins, and his life in Kansas, Hawaii and Djakarta. The text is descriptive, rhythmic and warm as mother and son engage in a back and forth of questions and answers, much as our real life story times go of an evening. (We have had a few chuckles over the delight my youngest takes in singing "Gramps and Toots, Gramps and Toots", rolling those endearing terms around his head). The story goes on through his college and post-grad years as he finds his calling and begins to engage in the work he is called to, impacting the world by the force of hope. The illustrations are bright and lovely. Obama's life is shown to be full of challenge and loss as well as love, connection, and hope. We can relate to Obama's pain over missing his father, his struggle to form an identity, his sadness in witnessing the struggles of poverty, his inspiration drawn from the strength of his family, and his decision to dedicate himself to getting an education in order to change the world positively.

My sons are thinking deeply about the layers in this story, as it is presented with a complex and imaginative format. Grimes states on her website:


"The idea was simple: to tell Obama's story in a cycle of poems. Okay, well maybe simple was not the right word, because I also thought it would be interesting to create a story within a story by having a mother tell the story to her son, and having them comment on Obama's story throughout.

Why a story within a story? Wouldn't that complicate things unnecessarily, you ask? Well, I never choose easy. You've read my books—you know that by now! Besides, I wanted to give the reader a young character to relate to, from beginning to end."


This format works well, as it draws the reader into a process of inquiry, thoughtful consideration, and studied appreciation of life as a continual development. My 10 year old son goes back and forth from the beginning to check on what questions the boy asked his mother at the start, and to get a better sense of the places Obama lived as a boy. He checks back to see when Obama felt the loss of his father, and when he reconnected, and when Obama's parents passed away. He wants to sort out the details and get the big picture of how exactly Obama built a life driven by a foundation of hope for a better future. At the end of the book we are satisfied and inspired. Grimes has done a beautiful job in this biography of our 44th president!

In February on Mondays, Wednesdays, and Fridays I am featuring picture books, biographies, chapter books and poetry by, for and about African Americans for Black History month. Stop by often to get reviews on some wonderful new and well-loved books.

This post is included in the weekly Non-Fiction round up of kidlit blogs at Apples With Many Seeds. It will also be in the World Wednesday round up at Ms. YingLingReads. Take a few minutes to enjoy some of the other blogs linked in these two locations this week.

Bonus link: here's my mother's blog with a review of Ben and the Emancipation Proclamation. She's an experienced reviewer with a very insightful blog!
Posted by Andromeda Jazmon at 5:00:00 AM

Thanks for posting this! I'll include it on the World Wednesday Round Up

Thanks for your recommendation and participating in this week's Nonfiction Monday.
Tammy
Apples with Many Seeds