Review: What Color is My World?

The Lost History of African-American Inventors. by Kareem Abdul-Jabber and Raymond Obstfeld, illustrated by Ben Boos & A. G. Ford.  Candlewick, 2012. This is a fun, informative book introducing children to some of the major scientists and inventors of African American dissent.  Told in story format, we join 13 year old twins Herbie and Ella when they move into a fixer-upper home in a suburban neighborhood. The handyman who comes around to help make their home livable shares his wealth of knowledge about African American minds that have gone into the history of modern conveniences.

We first learn about Dr. Henry T. Sampson, who "invented the gamma electric cell, which makes it possible to convert nuclear radiation into electricity." As we read the story, which is illustrated in full color paintings and filled with snappy dialog between the twins, we go on to learn about James West, the black man who invented the microphone in your cell phone, and Dr. Mark Dean, a VP at IBM. There is also a profile of Dr. Valerie L. Thomas, who worked for NASA and designed something called an "Illusion transmitter" that creates 3D projections. I would have liked to see more women included, as she is the only one mentioned.

Interspersed between the story pages and on fold-out flaps are notes taken by Ella, as well as extended explanations of the problems solved by these clever scientists and inventors, including how microphones and race car drivers are related. There are full pages spreads on interesting background details such as the family history of Dr. Percy Lavon Julian, whose passion for chemistry brought him from a segregated elementary school in rural Alabama to induction into the National Inventors Hall of Fame in 1990 after developing a method for synthesizing cortisone from soy, which made it affordable and available to millions of pain sufferers. My boys will be particularly interested in the story Lonnie Johnson, the NASA engineer who invented the Super Soaker. His other major achievements include working for the Air Force with the Strategic Air Command to develop the stealth bomber.

This is an attractive and entertaining look at some fascinating figures of modern history, sure to be an excellent addition to Intermediate and Middle School classrooms, homes and libraries. New York Daily News review here.

This post is linked to the Non-Fiction Monday round up at Abby the Librarian.

This is one of the books I have purchased for my boys for International Book Giving Day coming up on February 14. What are you doing to celebrate? 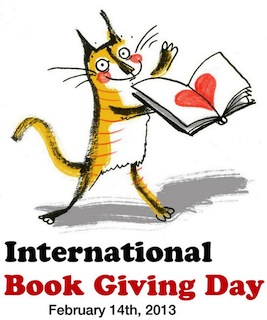