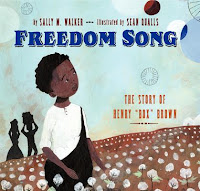 by Sally M. Walker, illustrated by Sean Qualls. HarperCollins Children's, 2012. (review copy) In the author's note at the end of this lovely middle grade picture book Sally Walker tell of how she first learned the real life story of Henry "Box" Brown's 1849 escape from slavery. She was a choir member and music lover, and was fascinated to later learn that Henry was a member of his church choir. She decided to tell his story with an emphasis on the power of music. Walker begins her tale with the joy and delight of a family welcoming a new baby:


"When Henry Brown came into this world, his family sang. Mama blew kisses on his soft, brown belly. Papa named him Henry, held him high to the sky. Sisters and brothers tickled his toes."

The story builds as Henry grows tall on Mama's cooking and smart on Papa's stories. The emphasis on family love, community strength, and the power of song to endure the blistering work and cruelty of slavery is what makes this book unforgettable. Henry sings work songs and play songs, and at night he sings sleep songs. His life is held together by songs of hope.


"Henry knew children who'd been sold from their mamas. He'd heard them crying at night. Henry's freedom song promised a place where families stayed together. Sometimes, freedom-song words tried to sneak from his mouth. That was when Henry bit his lips together, held the words inside. His master whipped slaves who sang freedom songs. He even sold them far, far away."

This is a hard truth to read to young ones. But the fact that Henry survived and found a way to escape this grave injustice is a truth that children need to hear. This is more than a story of the horrors of slavery. A life that would make a man desperate enough to risk his life mailing himself in a box. It is also a story of the triumph of the human spirit expressed as music.

When Henry grows up he falls in love, marries and has children. His wife, Nancy, has a different master. He works in a tobacco factory. He is the kind of father that sings to his babies, rocks them and gives piggyback rides. Walker says, "Family songs hushed Henry's freedom song." But when her master sells his wife and children, Henry's song reverberates and forces a creative, desperate escape plan. The trip is perilous and difficult. But when the box makes it to Philadelphia and Henry is released, he bursts into song again, praising God for deliverance with a new song. This book doesn't shy away from the tragedy and suffering of our history of slavery. It frames it with the spirit of faithfulness, love, courage and creativity that allowed people to survive and find grace in its midst.

I nominated this book for a Cybils award in the Nonfiction Picture Book category. The Cybils are the Children's and Young Adult book bloggers awards, in it's seventh year of recognizing the most outstanding books of the year chosen by children's literature lovers. Anyone can nominate their favorite books in seven categories. Go check it out and make sure your favorite books of the year get mentioned!
Posted by Andromeda Jazmon at 2:39:00 PM