Review: How the Moon Regained her Shape 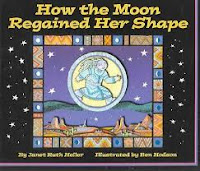 by Janet Ruth Heller, illustrated by Ben Hodson. Silvan Dell, 2006. (Review copy). This gorgeously illustrated folktale is about the moon. It is a compelling story about how to deal with bullying, insulting behavior. The sun, with a mean face and a brash attitude, tells the moon she is not needed by anyone. Moon shrinks away to a "sliver of her former self" in shame and embarrassment, until her friend Comet kindly brings her to Round Arms, a woman living at the base of the mountains who knows the power of love and encouragement. By reminding Moon of the ones who love her, including rabbits, artists and women who dance under the light of the moon, Round Arms restores the faith and joy of Moon so that she returns to her full self.

I received word from Slivan Dell of a link to the ebook version of this volume at their website, which is free to all for the month of November. (click on the book cover in the right hand column of the home page).


How the Moon Regained Her Shape is Sylvan Dell Publishing’s November featured eBook. Anyone can access this book for the entire month of November on the Sylvan Dell homepage.

I showed it to second and first graders in the library last week and they loved it! They wanted to see the print version too in order to hold it in their hands and peruse the lovely artwork, so I am glad to have both versions available in the library.  We saw, read and listened to the book on the wide screen in the library and it was a delightful experience. The print copy has had a lot of traffic, and when I left the ebook open on the computer the children flipped through it over & over.

The book has additional information about the phases of the moon on the final pages, and on the computer you can zoom in to see the descriptive diagrams large. The children were fascinated by the difference views of the moon through out the month as it waxes and wanes. I learned something new too; I have been admiring and watching the moon my whole life but I never realized that as it waxes and wanes it appears in predicatable places in the sky at certain times of day:

"As it approaches full, the moon appears to be getting bigger and is visible in the east in the afternoon. About two weeks after the new moon, the full moon rises when the sun sets and sets when the sun rises. The moon appears to get smaller, or to wane, after the full moon. Then the bright side of the moon points to the rising sun. The third-quarter moon is highest in the sky when the sun rises and can be seen in the morning on a clear day. As the moon approaches its new moon phase once again, its sliver (or crescent) is visible in the eastern sky just before sunrise, then after the new moon, in the western sky just after sunset."

So if you see the crescent moon in the sky in the early morning, the light side of it is facing the rising sun. If you see a crescent moon in the afternoon sky, the light side is facing the setting sun.  They curl in opposite directions. Makes sense but I never thought of it that together before! So cool to learn new information from a folklore picture book.

The other part of this book that the children were really focused on was the helpful strategies for dealing with bullies. We had just spent some time school-wide talking about dealing with bullies, so the children had it fresh in their minds. They were able to talk about what they had experienced and restate useful, effective strategies for dealing with it in real life, such as leaving the bully without engaging in back and forth, telling someone else, and finding positive, loving relationships to bolster yourself under stress. This book is a beautiful blend of story, scientific information about the natural world, and real life personal relationship wisdom.

The one thing about the book that I am not sure of is the sort of Native-American-ish nature of the folklore and illustrations. It is not an actual Native American story and the artwork is only loosely based on a Native-ish style, which does not claim to be any particular culture. But it may lead one to believe they are reading an actual folktale developed and passed on by a particular tribal group. That makes me uncomfortable because it is clearly not so. On the other hand, what is wrong with echoing a style of art and using a traditional voice in telling a story? There is a very critical review of the book at  American Indians in Children's Literature. What do you think?

Be sure to visit the Silvan Dell homepage to see this  ebook for yourself. And check out the Nonfiction Monday roundup of blog posts at the blog In Need of Chocolate. Enjoy!

Thanks for blogging about this book. I am very familiar with Sylvan Dell and would love to read this book. Thanks for letting us know the e-version is free this month. That is great! I will check it out, and am also curious about the American Indian theme. I think it is great that the kids in the library wanted to touch the real book, too. Although e-books have a lot to offer, I hope "real" books never go out of style!

What a cool librarian you are. I should see if I should do something like this at our library.

Thank you very much for reviewing my book about bullying, How the Moon Regained Her Shape. I was bullied when I was a child, and I wrote this book to help other kids cope with bullies.

I used Native-American characters because one of my friends, whom I based the character of Round Arms on, is Native American. Also, I have read many wonderful Native American legends as part of my scholarly research projects.

Thank you again for taking the time to review my book and share it with children!

Sincerely,
Janet Ruth Heller, author of How the Moon Regained Her Shape
My website is http://www.redroom.com/author/janet-ruth-heller

Thank you for responding to my post! It is great to get your perspective on the writing of the book. I am glad to know you based the character of Round Arms on a real life friend of yours. We need more people like her in the world!