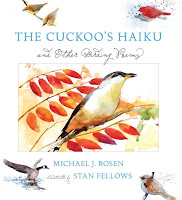 and Other Birding Poems by Michael J. Rosen, illustrated by Stan Fellows. Candlewick Press, 2009. Review copy. These thoughtful and descriptive haiku poems are delightfully illustrated with watercolor illustrations of the birds by Stan Fellows. Rosen takes particular features of the individual birds, such as their song, flight patterns, or eating habits, and crafts flowing images for us with spare, colorful words. He pulls the bluebird's plumage from the sky and plays with his song of spring's announcement. He compares the shape and long feeding preferences of the cardinal to quotations marks at dawn and dusk, and shows us sparrows as "a mitten-warmed fist". the haiku are organized by season, focusing on birds that are active and present in North America as the world turns. One of my favorites is for the Dark Eyed Junco, a bird that frequents my yard all winter. In the back of the book Rosen has a short paragraph about each bird that highlights the markings and habits which spoke to him in the writing of his haiku. About juncos he said: "most have very white underbellies. In traditional haiku poetry, the poet often looks for a sign of time passing. As juncos hop across the snow, they look like phases of the moon: bird-shaped half moon, quarter moon, crescent moon: a lunar calendar."

phased like tilted moons
half shadow, half reflection
juncos across the snow

Fellow's illustrations on every page are reflect the features Rosen has woven into his haiku. The birds are well drawn and their habitats are natural and realistic. I particularly enjoyed the way the American Crow illustrations shows an apple tree in white bloom with dark crows roosting up the center branches to match the haiku that calls the tree "one peeled fruit" and the birds "crow-seeds at its core". Perfect!

Haiku is an ancient form of Japanese poetry, traditionally with 17 syllables in three lines. In English the syllabule count has some flexibility. Usually the poems have to do with nature and mark the seasons. They should show sharp, clear images of one moment in time, bringing the reader present to that experience. The best haiku give us an "Aha!" revelation by contrasting two images.

In an interview with the Zanesville Times Rosen explains his writing of the birding haiku: "Birding and writing poetry have been a part of my life for decades," he said by e-mail. "When I began writing haiku, rather than other forms that are more familiar, they sort of take over. So many observations suddenly had an opportunity to try to become a poem. My head percolated with alternative versions of poems. Haiku is a way of culling things from the stream of things that rush past the senses."

"Haiku is a way of culling things from the stream of things that rush past the senses." Yes - Exactly!!

This book will make a wonderful edition to every library or home. Children will enjoy finding the birds around their home environment after reading the haiku and noting the markings and feeding routines shown in the book. Birding adults who have spent many cold mornings out in the wild will relish the chance to celebrate old friends from the comfort of a warm chair. I've got this book on my gifts-to-be -given list this spring and you should too!

I was asked in the comments last week if I could recommend some other haiku books. Here's a post from a while ago where I listed some of my favorites, with links to other blogger's lists.

There's a Friday Poetry round up going on at Carol's Corner. Go enjoy some great poetry! And since it's still National Poetry Month, be sure to keep checking in with all the bloggers doing special features and daily poetry in this link list. Please come back here later in the day for my daily haiga (photo & haiku) posting. I'm doing haiku every day this month.
Posted by Andromeda Jazmon at 8:00:00 AM

Thank you, Cloudsome! That looks like a book right up my alley. I take great delight in my birds, and I love haiku.

And thanks for the tip on how to post a live link. I'm going to go try it right now.

oh birds and haiku! I am so excited. Thank you for this post.

Another book I wantwantwant. I drooled on it just yesterday at Beehive Books.

Thanks for getting Jet the info on how to make a live link. Silly me, I tried to leave the info in the PF comments and wound up making a faux live link and losing the details of the code...and then I ran out of time to email her...sigh. So thanks! Knowing just a little bit of html makes one feel inordinately powerful. Well, it worked for me, anyway!

I saw at Jet's blog that Kelly left a better explanation. I am afraid I wasn't very clear. I tried to show the real code and of course it formatted it as a fake link - just like what happened to you. Fortunately I took my own advice and previewed! Then I had to try to reword it so it was much harder to understand. Oh well. I will try to figure out a better way to say it for next Poetry Friday.