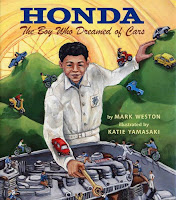 The Boy who Dreamed of Cars by Mark Weston, illustrated by Katie Yamasaki. Lee & Low Books, 2008. Review copy. On November 17, 1906 Soichiro Honda was born in the Japanese town of Tenryu. In1914, at the age of seven, he saw his first automobile roll through town. He fell in love much as Toady did in The Wind in the Willows. He grew up to become a global leader in the car industry.

He worked in a garage in Tokyo at the age of fifteen, and gradually advanced from sweeping the floor to repair work on the automobiles. Finally he was able to open his own shop. As an adult, after marrying and starting his family, he began to design race cars. He started making a lot of money and raced in his spare time. After an injury he had to give up racing and decided to concentrate of design improvements instead. He was inspired to improve metal piston rings and was successful in selling his improved products to Toyota.

After WW II he began to be interested in motorcycles. He wanted something as economical as a bicycle but faster. He and a partner opened a new factory to produce his design, called the Honda Motor Company. His factory was very successful, partly because of his design genus and partly because of the way he treated his employees. He expected the best from them and also provided the best. Good salaries, company gyms and swimming pools, and a share in the investment profits brought about loyal, hard workers.

When Honda came to America in 1959 sales of his small, user-friendly machines took off. By 1969 Honda was sending midsize cars to America as well. His engine design, created in collaboration with his engineers, was called the Compound Vortex Controlled Combustion engine. "CVCC", for short, or Civic.

The Honda Civic came to the US in 1972, during the gas shortage. The excellent gas millage of the Civic made it an instant hit. Honda retired in 1973 at the age of sixty six. Throughout his retirement he enjoyed hang gliding, golf and painting. He died at the age of 84 in 1991.

My boys love reading this biography over and over. Partly because we happen to have a Civic, and partly because they are just plain nuts about cars. The story of how Honda spent his life developing automobiles and motorcycles is inspiring and exciting to them. The text is clear and direct, with a nice balance of straightforward fact and description. There is a surprising amount of information about Japanese history and culture embedded in the story of the development on the auto industry.

The illustrations are beautiful, colorful paintings that show the detail and the complexity of Honda's life work. My boys enjoy studying the illustrations very carefully and have made numerous observations about the engines and tools as well as the exciting driving and racing scenes.

Any child with an interest in automobiles or motorcycles will enjoy this book. It is fascinating to read of how the industry developed and came to import in America as well. If you have a motorcycle lover in your circles this is a great pick.

The Monday Nonfiction round up is over at Mother Reader today. Go see!
Posted by Andromeda Jazmon at 11:11:00 AM

Thanks for the review. This sounds like a great book. I had a Honda Civic that I LOVED. I was so sad when I had to trade it in when my three kids couldn't fit so well in the back seat. Now we have a Honda accord.
Anyway, I never knew there was a story of one individual behind the Honda name. Cool.
Also want to thank you for stopping by our blog last week. Sounds like you're working at a wonderful school.

This sounds like the COOLEST book. I don't know why I never even thought that my Honda was named after someone. (Go Hybrids!)

My 8 year old loved this book, too (he's another car nut)! Count me in as another person who had no idea that Honda was somebody's name before coming across this book. I found it a fascinating story.

Great presentation of an inspirational story of an incredible man!