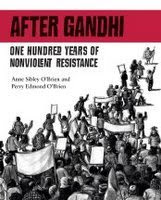 One Hundred Years of Nonviolent Resistance, by Anne Sibley O'Brien and Perry Edmond O'Brien. Charlesbridge, 2009. Review copy. In 1906 Mohandas Gandhi was working as a lawyer for the Asian Indian community in South Africa. On September 11, 1906 Gandhi made his first speech to a large crowd calling for nonviolent resistance to the government's oppressive requirement that all Asian residents register and be fingerprinted. In the next two years a movement was born that Gandhi lead with growing understanding of the extraordinary power of nonviolent resistance.

In the past one hundred years leaders all over the globe have studied his ideas and methods and lead successful nonviolent movements against repressive, unjust governments. After Gandhi is a comprehensive study of the ideas taking shape in the lives of leaders such as Thich Nhat Hanh of Vietnam, Rosa Parks, Cesar Chavez and Dr. Martin Luther King, Jr. in the United States, Nelson Mandela and Bishop Tutu of South Africa, the Madres de Plaza de Mayo in Argentina, Aung San Suu Kyi of Burma, the Student Activists of Tienanmen Square in China, Vaclav Havel in Czechoslovakia, and Wangari Maathai of Kenya, among others. Each of the peace heroes is profiled and Gandhi's role in their education and development is highlighted. Particular emphasis is placed on the influences and opportunities they faced in childhood and youth, making these profiles interesting and relevant to young readers.

Although I lived through most of these movements and have heard this and that about them in my education, in the media and in my social circles, I was surprised at how little detail I actually knew about their lives and the successes of their struggles for peace, justice and change. I found reading this book to be delightful, encouraging and inspiring. Gandhi says;

"Be the change you want to see in the world.

If we are to teach real peace in this world, and if we are to carry on a real war against war, we shall have to begin with the children.

Nonviolence is an intensely active force when properly understood and used.

A small body of determined spirits fired by an unquenchable faith in their mission can alter the course of history."

Quotations such as these are set off in red sidebars for each of the profiled personalities. There is an opening scenario setting the scene, an essay recounting the life and work of the major figure, and a short biography summing up their life's work for each of the profiled world leaders. Their lives are truly inspiring and their words are phenomenal. This is a book that every young person should read and have on hand to re-read often.

The charcoal sketch illustrations throughout the book include portraits of the leaders of resistance and scenes of the protest meetings and marches. The one weakness of this book, in my opinion, is that these graphics are not particularly appealing to youth accustomed to full color, lively graphics. In our school library books illustrated in this style are often taken for old fashioned, tired dust collectors. It's a shame but I can't tell you how many great biographies have been weeded out of the collection just because the kids won't pick up black and white illustrations. I am afraid this failing will keep the book out of the hands and sight of youngsters browsing the shelves. The book will have to be presented and supported by teachers, librarians and parents in order to display it's treasures.

At the end of the book the authors tell a story of their own recent peace march as they joined The Veterans and Survivors March for Peace and Justice: "Walkin' to New Orleans" in 2003, just six months after Katrina. They petitioned the government to bring our troops home from Iraq and focus on rebuilding the Gulf Coast. Anne Sibley O'Brien is a member of Military Families Speak Out and her son Perry Edmond O'Brien is a former Army medic serving in Afghanistan and Iraq who received an honorable discharge as a conscientious objector. He is the founder of www.peace-out.com, a website that helps servicemen navigate the conscientious objector application process.

Also noted: the final chapter is about the February 15, 2003 global peace protest promoted on the Internet.

"No one knows exactly how many people were involved, but estimates range from six to thirty million. The protesters were students,grandmothers, artists, businessmen and women, celebrities, nuns, veterans, children. In many languages, they spoke with one voice: "No War On Iraq!".... President George W. Bush and the US government didn't listen. On March 20th, 2003, American troops invaded Iraq."

Use this nonfiction, middle grade book of biographies in peace curriculum or to teach the Quaker SPICES of peace. (Quaker SPICES are the testimonies of Simplicity, Peace, Integrity, Community, Equality and Service by which we live). The kidlit book blogger's nonfiction Monday roundup is hosted by L. L. Owens today. Go take a look!

PASS THE PEACE: Inspired by After Gandhi, the Pass the Peace campaign is an effort to promote worldwide peace, tolerance, and nonviolent forms of protest. Charlesbridge Publishing has distributed posters to local companies, started a blog chain with a Pass the Peace widget, and donated money to Wangari Maathai's organization, The Greenbelt Movement, to spread the messages of the peacemakers profiled in the book. Feel free to post this widget to your blog, website, or social networking site, and forward it to others who may also wish to be involved.

Thanks for your kind note! I can't find the original -- I have three email accounts -- so I'm responding here. Much appreciated, and thanks for reading.

Thanks so much for this wonderful and extended review of our book!

Perry and I had a great experience researching and writing these stories. As our nation and the world face seemingly insoluble conflicts and challenges, it's moving and instructive to have the example of these people who, in the face of far greater difficulties, responded with extraordinary courage, strategic thinking and creativity.

As we worked on the book, we were assisted by a focus group of students from King Middle School here in Portland, Maine. A self-selected team who responded to an invitation from their school librarian, the students (who called themselves "Gandhi Publishing") met with us at various stages throughout the creation of the book and gave us feedback, influencing the book in important ways. In fact, one of our profiled leaders - Charles Perkins of the Aborigine Freedom Rides in Australia - is in the book because a student suggested him.

I'm interested in your concern that the b&w graphics might not appeal to the target audience, because we actually made the design choice on the basis of the students' expressed preferences.

On one of our visits, we instructed the students to peruse the nonfiction books in the school library and pick a title or two which appealed to them, based solely on the jacket image and design. To our surprise, because we had shared none of our design ideas with them, about half of the books that they brought back were black and white, with simple, bold designs, often with red accents!

This encouraged our creative team to continue in the direction we'd been leaning, towards a classic, clean, spare design with plenty of white space and simple, bold graphics.

We expect, as you suggest, that these inspiring heroes of nonviolent resistance will best be discovered by students when introduced by a librarian, teacher, youth leader or other engaged adult who can assist young people in discovering the challenge and excitement of becoming activist citizens.

We're grateful to you for your enthusiasm in helping this book find its audience!

Don, I think it was in Twitter. Hope all is well with you & your family.

Anne, Thank you so much for this thoughtful comment. I am glad to hear about how you worked with Middle School students on the development of the book. That is really inspiring. What a great way to involve readers in the project! I'm also glad to hear they liked the graphics style and would chose more books like that. I am going to add your book to our school library and hope to see it circulate a lot.

thanks for telling about this. I want to get a copy for my niece.

Oh thanks for this! I want to read it so badly.

Hi, Cloudscome,
Lovely to hear that the book will be in your library.

You might want to know about some additional resources for the book:
The publisher, Charlesbridge, has created a website for the book (http://www.charlesbridge.com/client/client_pages/after_gandhi/gandhi_home.html) with a discussion and activity guide, downloadable posters, interviews, and links.

Perry and I have launched our website (www.aftergandhi.com) with links for each of the people profiled, other figures and movements, and a series of essays on some of the lessons we learned from studying these people.

Finally, for educators, I have an occasional blog called "Coloring Between the Lines," reflecting on race and culture in children's books (http://coloringbetween.blogspot.com/).

Thanks again for helping us spread the word about these outstanding people and movements.