Review: Yours For Justice, Ida B. Wells 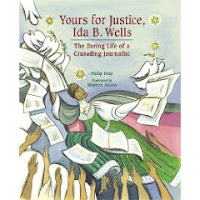 Ida B. Wells, born in Mississippi in 1862 in slavery and freed at the end of the Civil War. Her father was a carpenter. Her mother learned to read by attending school with her children. When Ida was 16 both parents died of yellow fever. Ida was determined to raise her younger brothers and sisters and became a teacher to support them. Over the years she began writing and became a journalist. She wrote against Jim Crow and spoke out against lynching. She traveled around giving speeches and raising awareness as her support grew. She ended up working in New York for the New York Age and her work had a tremendous impact on the movement to end the commonality of lynching. Ida B. Wells is a hero we should all hear more about. She unflinchingly believed in the good of Americans and never gave up her battle for truth to win out. In Mob Rule in Now Orleans she said:

"When this conscience wakes and speaks out in thunder tones, as it must, it will need facts to use as a weapon against injustice, barbarism and wrong. It is for this reason that I carefully compile, print and send forth these facts."

I greatly enjoyed reading this picture book biography. I think the watercolor sketch illustrations are beautiful. Their sweeping, flowing movements are a perfect compliment to the text. There are several spreads where you can feel the tension as Ida faces the evil of racism head on with unshakable faith in the power of truth and good. The violence and horror are expertly balanced with Ida's determined energy.

The last few pages of the book include further biographical information and, background on lynching, a timeline and list of recommended readings for ages 4 through 13 and Up. This is a wonderful resource!
Today's nonfiction roundup is at Picture Book of the Day. Enjoy!
Posted by Andromeda Jazmon at 9:57:00 AM

Great book review. This book is new to me, but I'm going to see if our library has a copy. Thanks for sharing!