Review: The Last Black King of the Kentucky Derby 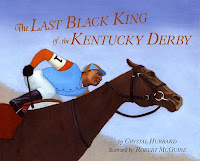 by Crystal Hubbard, (click the link on her name to read an author chat) illustrated by Robert McGuire. Lee & Low books, 2008. Cybils nonfiction picture book nominee. This fascinating picture book for middle and upper grades tells the life of Jimmy "Wink" Windfield, the last Black jockey to win the Kentucky Derby in 1902. The forward tells us that Black jockeys were common in 1875, when the Kentucky Derby was first run. By 1902 changing economic times and racism had pushed Black jockeys out of the sport. Wink suffered from hate groups and left the country after 1903. He continued to race in Europe and when he retired in France he had won over 2.600 races. Although he continued to love his country and his home in Kentucky he was never again treated with respect and courtesy or given the credit he deserved as one of the greatest jockeys in history.

The illustrations are vibrant and exciting. My two young boys are enthralled by the action and the thrill of the races. Older readers will be interested in the issues of racism, justice and equity. SLJ reviewer Diane Chen found the need to do further research with her students when they responded with pressing questions about the limitations racism forced on Wink Windfield. (She's got some great links and ideas in that post linked on her name.) That's the sign of a really good book doing it's job!

I received this book as a review copy and I am donating it to Flying Horse Farms. Author/poet/blogger Sara Lewis Holmes is starting a library of kid's horse books for this camp for kids with serious illnesses and their families. I think that's a fabulous idea! She's got a wish list going at Amazon full of wonderful books the campers will love. You can add your suggestions, make a donation, or send along a book or two yourself. Read more about it in her post here. It's a little thing that can go a long way towards making happiness for yourself and others this New Year!
Posted by Andromeda Jazmon at 10:38:00 AM

Thank you! I sent a link to the camp director too, and he totally appreciated your choice.

My editor at Lee & Low forwarded your review to me. Ordinarily, I try not to cross the space between writer and reviewer, but I had to contact you after I read your review.

It gave me goosebumps, the very best kind. Your review was far too kind, and I'm extremely grateful for it.

Your generosity in donating your review copy of The Last Black King of the Kentucky Derby has inspired me to act in kind.

I'm coming off surgery and a six-month cycle of chemotherapy, so I'm no stranger to serious illness. As soon as I complete this comment, I'll visit the website for Flying Horse Farms to investigate ways in which I can directly contribute to the organization.

In choosing subjects to write about, I look for people who accomplish goals that seem impossible. I choose people who inspire me to do my very best. Readers and reviewers such as yourself have given The Last Black King of the Kentucky Derby such a wonderful reception, it excites me to be able to pay that respect forward.

I think it would make Mr. Winkfield proud to know that his story can make a difference in the lives of others.

Thank you again for your review and for introducing me to Flying Horse Farms.

Crystal thank you so much for your kind comment! I am thrilled that you enjoyed my post. And I am even more thrilled that it has introduced you to Flying Horse Farm and the growing library for kids. They are going to love your book as much as we did!

On a personal note, I am sorry to hear you have had to go through surgery and chemo. I have just recently learned that I am going to have to have surgery in January and I am looking at a difficult winter for my family. My sympathies to you and yours. I think you have four kids so I know it must be hard for you all. My best wishes for the new year! Let 2009 be full of good health, peace and joy.