Time Off to Vote Laws? 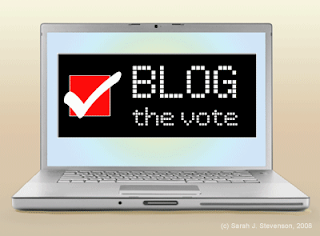 With election day coming in just three more days I am excited to join in with bloggers all over the kidlitosphere who are blogging about our voting rights. Colleen Mondor at Chasing Ray, Lee Wind and Gregory K. at Gottabook hatched a plan to bring us all together to Blog the Vote.

I am hearing reports on the radio that record voter turnouts are expected. Long lines, problems with voting machines, and unexpected delays are all getting me wondering about whether it will be possible for me to vote before work on Tuesday. Since I work about 45 minutes from my voting district and I have two kids to pick up on the way home I am afraid it will be too late to go after work. I was talking about it in the lunch room on Friday and my tech director said he thought there was a law assuring workers of their right to time off to vote. He said employers can not penalize workers for being late if they are waiting to vote. I said what if we are all late but the kids are on time? He said that would be interesting.

He has just recently moved here from another state so I wondered if it was a state law from his home state that didn't carry over to our current state. Since I'm a librarian I just had to do a little research to find out. I found some interesting sites.

It turns out it is a state law and not all the states have them. Here is a site where you can check your state and see what you qualify for: in some places you must not have your pay docked if you had to miss work to vote. In some states (including mine) there are no such laws at all and it's up to your employer to say what they will tolerate.

I am planning to get to the polling place in my neighborhood a little before they open at 7 am, and I hope not too many other folks will be up that early. If I have to wait a long time in line I'll just be late for work. I think it's OK because I don't teach an early class on Tuesday. Hopefully if I'm late my tech. director will be later for doing the same thing!

I can be a bit light hearted about it because I don't think I would be seriously penalized if I were late because of voting. But what if I were? What if I had a job I could lose just for coming in late? Plenty of people are in that situation. What about you? How important is it to you to vote and what would you give up for the opportunity?

I think the reason we are all expecting huge crowds this time around is that we have an election with dynamic, driven, highly respected candidates who are running on what they really believe is in our best interest as a country. Whether you agree with either of them or not, it's clear that they both are serious in their intentions. Now more than ever it is important to get out there and let your choice, your vote, your voice have an impact on the direction we take. There is no standing on the sidelines. We are all in this one.


Take some time to check out the laws in your state. Know where you are going to get to your polling place, bring ID just in case, and find out if it's OK for you to be late for work to vote. This is going to be one of the more exciting voting days in our lives - don't miss it!

Check out the round up at Chasing Ray to see what everyone else is blogging about around the theme of Voting.
Posted by Andromeda Jazmon at 8:37:00 PM

Maybe you can use the time in line to write poetry!

When I looked up the Census Report on the 04 vote, it looked at reasons why people didn't vote. Twenty percent cited no time because of school or work obligations. While right now I have a job where I get the day off, for years I didn't and would get up as early as possible to vote as soon as it opened.

Just wanted to send you virtual hugs {{{ }}} because I know for both of us this election brings us a new meaning for the children in our lives.

"It turns out it is a state law and not all the states have them."

I'm from California so I just assumed the right to time off to vote was practiced everywhere.

Thanks for posting this.
Lynn

In some of the states I lived, the public schools would be closed to host the voting booths. I'd like to see Election Tuesday be a federal holiday. I wonder if we can get it on a ballot...