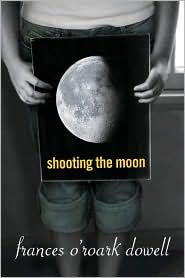 by Frances O'Roark Dowell. Altheneum Books, 2008. I stayed up much too late last night reading this book. I started it in the morning at my physical therapy appointment (rotator cuff tendinitis) while I was under the heating pad. I didn't think I was going to like it because it's about a 12 year old girl whose brother is sending her letters from Viet Nam. I thought war stories would be too upsetting. I gave it a chance because I loved all her other books so much. Her 12 year old girl characters are so much like me and my friends I can't put those books down.

I was only able to read the first couple chapters of shooting the moon in the morning, but then I thought about it all day at work. A soon as I got my little boys tucked in at night I grabbed it up again and read straight through to the ending.

Jamie is 12 and three quarters years old. Her brother TJ is five years older than her and signed up for the Army right after graduating high school. Her father is the Colonel and in charge of Fort Hood, Texas. In the beginning of the book everyone is gung-ho Army. Until TJ signs up and her dad starts acting like he'd rather his son went to college, that is. As the novel unfolds we start to see Jamie get a deeper understanding of her parents, herself and life in general.

She spends a lot of time volunteering at the rec center and makes friends with Private Hollister, the soldier on duty in the afternoons. They play hand after hand of gin rummy and talk. Jamie brags about her brother and Private Hollister introduces her to his ideas of what war is really about. When TJ starts sending rolls of film back from Viet Nam Jamie learns how to use the dark room and develops his photos. Her perspective changes as she sees his images.

Since I am so much into photography myself these days I found this aspect fascinating. When Jamie goes to eighth grade she joins the school paper and starts taking pictures as well as developing them. Her new friend Alice explains that photography is "the art of writing with light." I like that. She develops all TJ's pictures but she doesn't show them all to everyone. She is starting to realize that photographs reveal what we don't normally see, and often show what we don't want to see. She only shows her parents the happy ones of pretty girls and flowers. She only shows the other soldiers the ones they say they want to see; equipment or helicopters or wounded GIs, depending. She shows her neighbor girl friend all the ones of the moon, which TJ seems to favor shooting in all it's phases.

She remembers that before TJ had left for Viet Nam he sorted through all his old photos and showed her some he had taken of their parents.

"Look at this one of mom," he said, holding up a picture of my mother looking up from the book she was reading, Pride and Prejudice, her favorite novel of all time, her forehead furrowed with deep lines, as though they had drawn them on. Her expression was clearly saying, I get five minutes to myself all day, so you best back out of the room slowly and leave me be.
"That's not going to be her favorite picture in the world," I said. "I'd think twice before showing it to her."
"Yeah, maybe you're right." TJ put the photograph down on the floor and picked up another, this one of the Colonel getting out of the car after work. It was what they call a candid shot, which means the Colonel didn't know TJ was taking it. His face was halfway in the shadows of the carport, but the sunlight caught the shine of his polished boots. I was surprised by how tired he looked.
"When did you take that one?"
TJ shrugged. "A couple of weeks ago, I guess. He looks like an old man, huh? I guess that's another one not quite right for the family album."
I took the picture from TJ and examined it more closely. There were bags under the Colonel's eyes. He was carrying a briefcase, but by the slump of his shoulders, you'd think he was carrying a suitcase full of cement.
There was no doubt about it. The Colonel looked like a man who hated his job."

Jamie had described her father as loving the Army in the beginning of the book. He credited the Army for shaping his life and his father's life, giving them discipline, structure and support all their lives.

"Kids," he'd say, leaning back on the couch, his arms spread out wide, "I am a man of the world, full of knowledge and vision, a lover of international cuisine, an appreciator of fine art and good-looking women, and I have the United States Army to thank for this most excellent state of affairs."

But when his own son signs up and is sent to battle, he shows a different side. Jamie comes to understand something of the complexity of life when she watches her father's reaction and as she receives TJ's photographs of Viet Nam.

This is a really wonderful middle grade novel, highly recommended for boys and girls alike. You could use it as a discussion starter around the topics of family, war, and changing perspectives, an example of memoir writing and excellent dialog that moves the story along and reveals character traits, or to introduce comparisons of writing and the visual arts (photography). On the other hand, you could just curl up and enjoy reading it for the sheer pleasure of a great story.
Posted by Andromeda Jazmon at 8:21:00 AM

My mother's day plant sale to raise money at the library had better be a success--the list of books I want to buy just got longer!

This sounds really good. The photography angle is especially intriguing.

This sounds really good. Going to put it on reserve today!