January - Thunder Rose "Rose is a hero that transforms her world through kindness, boldness, determined attention, thoughtfulness and song. She receives love, treasures it, opens her heart and releases her power. We need more heroes like Thunder Rose. "

March - The Higher Power of Lucky "Who knew that an honest conversation on a list serv with a specialized membership would be taken so far? "

April - A Drowned Maiden's Hair "She measures each interaction, testing the thickness of the ice and calculating just how far it is safe to risk involvement of her heart."

May - Uncle Remus "I believe a whole new window has opened for me on the folklore of America. I am so delighted to have the summer ahead of me that includes a front porch, lazy afternoons when the baby will be sleeping while the preschooler is in the mood to hear stories, and a bookstore gift certificate that will start me on my plan to acquire a stack of Lester’s Uncle Remus books. All we need is some lemonade and a porch swing…"

June - Honeysuckle House "In school the teacher introduces a new girl named Tina, who has just arrived from China. Tina has studied English but has little experience communicating with native speakers. Sarah is Chinese-American but can't speak Chinese. She feels completely American and can't understand why the teacher wants to pair her up with Tina. Both girls hate how teachers frequently call them by the other's name, as if they can't tell them apart."

July - Gregor and the Marks of Secret "I think you could have some very stimulating discussions with kids about how they deal with aggression, rivalry and vengeance in their own lives and what they think Gregor and Luxa should do."

August - Harry Potter and the Deathly Hallows "What would we conclude about Rowling's ideas of motherhood, orphans and mother love?"

September - Awakening the Heart "Heard tells a story of when she was teaching a poetry class to a group of third graders one day. "

October - The Chicken Chasing Queen of Lamar County "This book is a wonder. Ms. Jackson is a poet, a librarian and a storyteller, and she shines in crafting the music of this story. The word choice is exquisite and the timing is perfect."

November - Haiku Books for Children - a list of some of my favorites.

December - Three Cups of Tea "I had the opportunity to hear Greg Mortenson speak recently and he was phenomenal. His story is so inspiring I almost don't know where to begin. "

My Favorite Haiku of the Year: 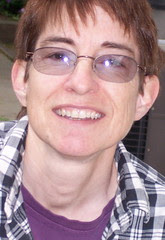 2007 was the year my oldest son finished his freshman year of college, my middle son started kindergarten and my youngest son turned 2.

It's the year I learned to knit in cables, bake good gluten free bread and write better book reviews.

It's the year I got a porch swing.

It's the year I took photos every day and published them on my 365 Photo blog.

What did you do, learn and experience this year? Do you have a review of the year post up? Leave me a comment so I can come and see what you've selected as your favorite posts in 2007.
Posted by Andromeda Jazmon at 5:14:00 AM

I can't imagine how you do all that you do (kids, library, knitting, photographing, gluten-freeing), and yet a sense of calm and order emanates from your blog. Thank you for a place of peace in a chaotic world!

Oh Andi, what a great post. Thanks so much for highlighting your year. It's been great to follow along. I can't wait to see what 2008 brings. Best wishes for a happy new year.

Great post. Here's to a wonderful 2008 to you and your family!

Thanks for this post. It reminded me of several books I want to read, and I loved moving backward through the year in your favorite haiku. "Flying lessons" and the starting with purple or gathering purple...those two haiku really stand out to me.

And an end-of-the-year post...that didn't even occur to me. Maybe I'll do a roundup tomorrow of a few of my favorites. Or, loooking at my calendar, maybe not:>)

I just wanted to give you a virtual pat on the back for a great year of blogging, reviewing, writing, and photographing. (I don't think that the last one is a word exactly, but so what.) Happy 2008!

Thanks all! One of the best things about 2007 is sharing it with friends like all of you.