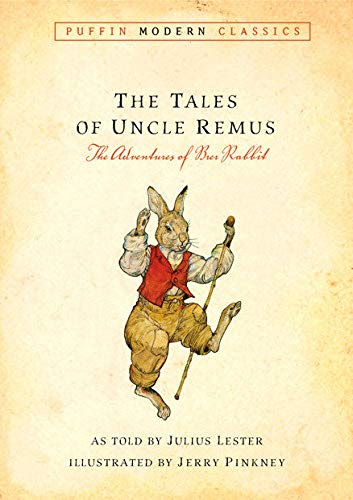 Somehow growing up I got the feeling that there was something racist, and therefore shameful, about the Brer Rabbit stories. Maybe it was the way black people are portrayed in The Song of the South. Maybe I heard friends scorning the southern black dialect written into the Tales of Uncle Remus by Joel Chandler Harris. In any case, I have avoided them for most of my life. What treasures I have been missing!

I have been reading Julius Lester's How Many Spots Does A Leopard Have? to my first graders and we love it. The children are on the edge of their seats. The language is beautiful and clever. Every story sparks discussion.

Since I am looking for a new author study to carry the kindergarten through to the end of the year I decided to look into Lester's Tales of Uncle Remus. I learned from reading Augusta Baker's introduction to The Adventures of Brer Rabbit that the stories had been told to her by her mother, who had heard them from her mother. Ms. Baker is the former Coordinator of Children's Services of the New York Public Library and Storyteller-in-Residence at the University of South Carolina. She says,

"It wasn't until several years later, in college, that I learned about the importance of these stories as true American folklore. Dr. Harold Thompson, a leading American folklorist, gave a lecture on people from the West Coast of Africa who had been captured and sold as slaves. Some were settled in the southern states where they took stories from home about a hare - Wakaima - and adapted them to their new surroundings. Wakaima became Brer Rabbit and the clay man became the Tar Baby."

She says she tried reading Harris' books several times, but never could get past the dialect which was like a foreign language to her.

"Despite the drawbacks in Harris’s text, I still loved the stories and appreciated Brer Rabbit as a cultural hero and a significant part of my heritage. However, I was telling the stories less and less often because of the dialect.... How could I represent our African Background and the relationship between Africa and black America to primary grades? How could I show the fusion of the different African cultures and the cultures existing in American and the West Indies?"

When she first reads Lester's The Knee-High Man and Other Tales in 1972 she found them to be "black folktales told perfectly." Lester went on to publish four volumes of Brer Rabbit tales, as well as many other books for children.

Lester gives a history of the Uncle Remus stories in his forward to The Adventures of Brer Rabbit. He gives the background of the stories coming from West African folktales. He says,

“Uncle Remus became a stereotype, and therefore negative, not because of inaccuracies in Harris’s characterization, but because he was used as a symbol of slavery and a retrospective justification for it… If there is one aspect of the Uncle Remus stories with which one could seriously disagree, it is the social setting in which the tales are told. Uncle Remus, and sometimes other blacks, tell the stories to an audience of one – a little white boy, the son of the plantation owner. While such a setting added to the appeal and accessibility of the tales for whites, it leaves the reader with no sense of the important role the tales played in black life. The telling of black folktales, and indeed tales of all cultures, was a social event bringing together adults and children. That folktales are now considered primarily stories for children is an indication of our society’s spiritual impoverishment. Traditionally, tales were told by adults to adults. If the children were quiet, they might be allowed to listen. Clearly, black folktales were not created and told for the entertainment of little white children, as the Uncle Remus tales would lead one to believe.”

Lester goes on to explain what adaptations he has made in telling the tales, and what important elements he has retained.

To give you a taste of my new found delight here is a link to some of Lester’s tales online. The first three I read this morning and just about spit my coffee across the library they are so funny. If you haven’t read any of Lester’s folktales you are in for a treat!

I believe a whole new window has opened for me on the folklore of America. I am so delighted to have the summer ahead of me that includes a front porch, lazy afternoons when the baby will be sleeping while the preschooler is in the mood to hear stories, and a bookstore gift certificate that will start me on my plan to acquire a stack of Lester’s Uncle Remus books. All we need is some lemonade and a porch swing…

Edited to add: I found out from reading a comment on Alkelda's blog that Lester read his tales for Recorded Books. I requested it from the library and I am looking forward to hearing the stories in his own voice. Bring on that lemonade!
Posted by Andromeda Jazmon at 10:03:00 AM

My mom used to read to me the Julius Lester's versions of the Brer Rabbit stories. It's still a running joke in our family that the only way you know someone is really taking a nap (instead of being dead) is if s/he sticks his or her leg up in the air and yells, "Wahoo!"

These are hiLARious! My favorite quote from Brer Fox and Mr. Man:

"But Brer Rabbit had won the lottery and was off scuba diving in Jamaica."