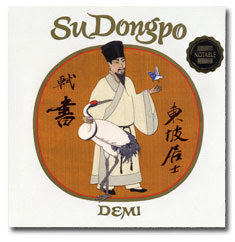 by Demi. Lee & Low books, 2006. As always Demi's fabulous paintings illustrate this beautiful book. For more in depth information on Demi and her amazing work read this link.

Demi's biography of Su Dongpo tells of the accomplishments and adventures of China's greatest genius. In the introduction she states "He was a statesman, philosopher, poet, painter, engineer, architect, and humanitarian who approached everything with joy and grace." At the low times in his life he lived in poverty in a forgotten corner of the back country, where he learned to appreciate the beauty of a simple, fulfilling life of farming. At other times in his life he was acknowledged to be a great leader in the Emperor's court and lived in elegance and luxury. He worked as a magistrate, governor, judge, financier and social reformer. He was also a brilliant poet and painter. Demi also says "His life embodied the enlightenment of Buddhism, the simplicity of Taoism, and the wise teachings of Confucianism."

Aside from the beautiful artwork, which Demi is known for, the thing I like best about this book is the way Demi incorporates the influence of Su Pongpo's parents during his childhood. He mother and father were both established scholars. His mother taught him and his younger brother the classic Chinese stories when they were small. She told them "As a little seed one day will become a great tree, as a flowing river can carve a mighty rock, neither of these can you see at work with your own eyes. But one day their effort will show! One day the work you do will show too!" Su's father taught the boys to read and recite the classics in training for the official examinations. When they were young men they traveled to the capital at Kaifeng. Su Ziyou, the younger brother, passed the exams with high honors and Su Shih (Dongpo) achieved the highest score of anyone in the country. He was designated the First Scholar of the land. Both of them were guaranteed official careers.

Su Dongpo lived in the Song era, from 1037 - 1101. This is one piece of information that Demi leaves out of the book, as she neglects to include a time line. One of the interesting facts that she does include is that he designed the causeways crossing the West Lake of Hangzhou, still in use today. When I visited Hangzhou twenty some years ago West Lake was memorable for its beauty and peace. There is a statue of Su Dongpo there in commemoration of his great work.

One thing I didn't like about the book is the bias she shows against the residents of Hainan Island. Su Dongpo is dismissed to live there outside the realm when in disgrace after his patron the dowager empress dies. Su learns to appreciate the simplicity of life there and becomes quite happy. Demi describes the island as "a place inhabited only by natives." I am sure it was a shock after living in the heart of the life at court, but those who called it home must have found it to be not without its own charm and value. By referring to them as "natives" Demi repeats the traditional disdain of Han Chinese for outsiders.

On the whole I found this to be a lovely book and I look forward to sharing it with everyone interested in learning about China and this great scholar, poet and statesmen.

Book Buds
Big A little a
A Chair, A Fireplace, and A Tea Cozy
Paper Tigers review
Posted by Andromeda Jazmon at 12:07:00 PM

I love Demi!! Even though my kids are older, I'm going to have to get this one for the collection. Thanks for reviewing it!